Memorial Day for the Rediscovery of Dhammakaya Knowledge

In Remembrance of Luangpu Wat Paknam

In 1906, a 22-year-old man named Sodh Mikaewnoi decided to be ordained as a Buddhist monk at Wat Songpinong in his hometown, Suphanburi Province and was given the monastic name “Candasaro”. The next day after ordination, he began studying the Pali Canon and practicing meditation. He always looked for opportunities to deepen his knowledge in both of these areas with masters at various temples with the hopes that one day he would truly comprehend the teachings of the Lord Buddha. Eleven years later, he still had not fulfilled this wish.

At Wat Bote-bon, Bangkuvieng, Nonthaburi Province, on the full moon day of the tenth lunar month in 1917, at the age of 33 years old, he decided to put his life on the line and make a vow meditate continuously until he either attained the Dhamma of the Lord Buddha or died. He then proceeded to meditate until his mind became completely still and a Dhamma sphere arose from within. As he continued to observe, spheres continually emerged, each one brighter and clearer than the one preceding it.  His meditation continued to progress as the night went on, and he attained many different inner bodies until reaching what is known as Dhammakaya.

This event at Wat Bote-bon illustrates that Luangpu Wat Paknam (Sodh Candasaro) proved the validity of the Lord Buddha’s enlightenment. His attainment showed that everyone can meditate and attain the Dhamma. A Dhamma which stands the test of time (akāliko) and can be attained by anyone who practices the middle way properly.

The Day of the Rediscovery

On the full moon day of the tenth lunar month in 1917, after Luangpu Sodh came back from his alms round around 8 o’clock, he began to meditate in the chapel. He set the intention that he wouldn’t stop until he heard the sound of the temple drum at 11 o’clock that signaled that it was time for lunch. With his intention firmly set, he closed his eyes and continually recited “Samma Arahang” in his mind. The pain and numbness from sitting still gradually increased little by little until there was a feeling that every bone was about to explode into many pieces. As the pain became almost impossible to endure, a deep anxiety arose.

“Oh… I have never felt this way before. Unlike previous meditation sessions, why is there so much anxiety after setting the intention that I would not stop meditating until hearing the drum? How much longer must I endure this before the eleven o’clock drum sounds?”

Thinking about it, his mind swayed to a point that he almost gave up several times. However, since he had already established the intention, he continued to meditate. His mind gradually calmed down and became still at a singular focal point. Then, a bright and clear sphere the size of a chicken’s egg yolk appeared. In his mind, he was inexplicably delighted. The ache and pain miraculously disappeared. Then came the sound of the drum.

He was filled with elation for the rest of the day. The bright and clear Dhamma sphere was still visible at the center of the body all day long. After attending the fortnightly recitation of the fundamental precepts in the evening with his fellow monks, he walked inside the chapel and declared his intention:

“Even if my flesh and blood would dry up, being left with skin, tendons and bones, I would not stop meditating in this sitting position until I attain the Dhamma of the Lord Buddha. May the Most Exalted One show me compassion and grant me the least and easiest of thy Enlightened Knowledge. Should my attainment of the Enlightened Knowledge be detrimental to Buddhism, please do not grant it to me; but if it can benefit Buddhism, may the Lord Buddha have compassion and bestow the Dhamma upon me. I will be thy champion to uphold the greatness of thy Teachings for the rest of my life.”

After making the vow, Luangpu began to sit cross-legged to meditate. At first, he thought of the ants that were crawling back and forth between the rock slabs. So, he picked up a bottle of kerosene, dipped his finger in it, and began drawing a circle on the floor around his body to prevent the ants from disturbing. After his finger touched the stone floor for less than half of a circle, then he wondered, why would he be afraid of the ants when he was willing to sacrifice his life. Feeling ashamed, he put the kerosene bottle down and meditated for about half the night. When his mind became still at one focal point, the bright and clear sphere which had been there at the center of the body since morning became brighter and clearer and then grew to the size of the sun. At that point, he did not know what to do next because he had never had such an experience before.

As his mind stayed still at the focal point, a voice came out of the center of the sphere saying, ‘majjhima-patipada’, a term from the ancient Pali language meaning ‘Middle Way’. As the voice softly resonated in his meditation, there was a small glowing speck that flashed from the center of the sphere. The spot was brighter than the surrounding sphere. He kept observing and thought that this, in fact, may be the middle way. The little spot that had just appeared was right in the middle. He focused his mind at that spot and waited to see what would happen.

The spot gradually expanded and grew to the same size as the previous sphere. Then, the previous sphere disappeared. As he kept observing, new spheres kept emerging, replacing the previous ones, like water in a fountain rising to displace one another. The new emerging spheres were brighter and clearer than the previous ones. As he went into deeper states, different inner bodies appeared in his meditation. Ultimately, Dhammakaya appeared as a bright and clear Buddha image, with the crest shaped like a lotus bud, more marvelous than any Buddha image in the world. Then, the voice of Dhammakaya resonated out in his meditation, ‘This is right!’, bringing him extreme delight, the likes of which he had never experienced before. He then whispered to himself:

“Ah, it is so hard like this … how could anybody perceive it? It is beyond perception, memory, thought, and cognition. One would not attain it through these. Perception, memory, thought, cognition … all these things must come to a standstill and be united at one single point. Once the mind “stops”, these things cease to be. Once they cease to be, attainment can be realized. This is the real thing. This is where the link is. Everything must come to the right point of balance before attainment can happen.”

Dhammakaya meditation, which is the way to attain the enlightenment the Lord Buddha attained, is very profound. This is reflected in Luangpu’s statement:

“The Dhamma is this profound. Who would have guessed? It is beyond thinking. If one still thinks, one will not attain it.” 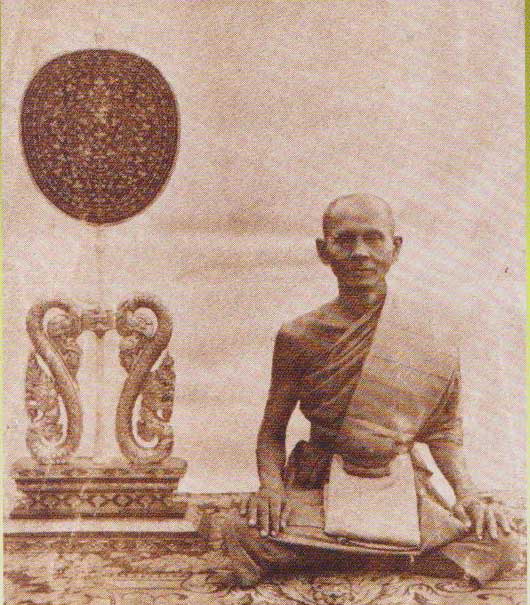 As Luangpu continued to meditate for another 30 minutes, an image of Wat Bangpla appeared in meditation. The feeling at that moment was like he was really at the temple. He realized that the appearance of such an image was telling him there must be someone who can attain the hard-to-attain Dhamma. He kept that in mind and devoted the remaining month of Buddhist Lent solely to the practice of meditation. The more he meditated, the more profound it became. After the Buddhist Lent had ended, he traveled to Wat Bangpla to teach meditation. During four months of teaching, three monks, namely, Venerable Sangvarn, Venerable Baen and Venerable Oam, and four laypeople were able to attain Dhammakaya.

Being the Abbot of Wat Paknam

Luangpu Wat Paknam Bhasicharoen, also known as Luangpor Wat Paknam, was a monk who has been highly admired. People know him by this name, because he was assigned to be the acting abbot of Wat Paknam in 1916, and was appointed the abbot in 1920 and resumed the position until 1959. When he first came to be in charge of Wat Paknam, the temple was in a semi-abandoned state. He began to revive the temple, focusing on training monks and laypeople. Besides supervising monks and novices to strictly observe the precepts, he actively taught meditation based on the principle of contemplation on the virtues of the Lord Buddha. He did this by reciting in the mind the word ‘Samma Arahang’, meaning ‘Right Enlightenment of the Lord Buddha’ while keeping the mind at the seventh base, located at the center of the body. The mindful contemplation on the Lord Buddha is extremely beneficial in the meditation practice. Luangpu explained that mindful contemplation on the Lord Buddha is a practice to awaken, brighten, strengthen, and encourage the mind to continue practicing meditation. It is a good practice for Buddhists in general. In addition, he also promoted the study of Buddhist scriptures by setting up the most modern school for Dhamma and Pali studies in those days. As Wat Paknam had gradually been revived, more and more people came to learn meditation, and some decided to become monks.

The Importance of Luangpu to Buddhism

Dhammakaya is an important word and appears in many places in the Tipitaka and Buddhist texts of Theravada, Mahayana, and Vajrayana traditions. For example, the Buddha once said to the novice Vasettha:

“O Vasetthas! The word of Dhammakaya is indeed the name of the Tathagata”.

Luangpu Sodh taught the meditation method in great detail, step by step, systematically, in an easy to follow way starting from the basics. Consequently, a lot of people made many achievements in their own meditation practice. His reputation for teaching meditation had spread across the continent to many European countries, enabling Thai Buddhism to spread far and wide like never before in the history of Thai Sangha Circle. It also attracted many foreigners to come to Wat Paknam to learn meditation and be ordained.

Besides teaching the Dhamma and meditation practice tirelessly by himself, Luangpu assigned important duties to an outstanding student who had excellent achievement in Dhamma practice to carry on teaching Dhammakaya meditation and propagate this knowledge for the whole world to know.

After Luangpu had passed away, an outstanding student of Luangpu named Chand Konnokyoong, also known as Khun Yai, began teaching meditation to interested people. One of them was a high school student named Chaiyaboon, who later became Luangpor Dhammajayo after his ordination. At the time, Chaiyaboon had received meditation training from Khun Yai until he attained Dhammakaya. The inner happiness he received from meditation in combination with the intention of propagating the Dhamma and meditation practice, following Luangpu’s will, had shaped up into an aspiration to help people to attain inner peace and happiness. This aspiration later became Wat Phra Dhammakaya’s goal to teach meditation to the public to attain inner peace and happiness which will eventually lead to world peace.

In Remembrance of the Master who Rediscovered Dhammakaya Knowledge

The full moon day of the tenth lunar month of every year is dedicated as ‘memorial day for the rediscovery of Dhammakaya’, on which all disciples from around the world will organize various meritorious events to pay homage to Luangpu for his great contribution to Buddhism in reviving Dhammakaya Knowledge. For this year, the memorial day is on September 21. Wat Phra Dhammakaya therefore would like to invite everyone around the world to pay gratitude to Luangpu Wat Paknam (Sodh Candasaro) by chanting, meditating and spreading loving-kindness together with thousands of domestic and international monks through ‘Zoom’. This shall be a wonderful opportunity for everyone to accumulate merit and pray for the world to be free from various dangers and become more peaceful.